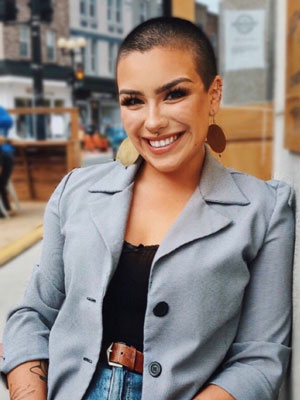 Riley Yesno of Victoria College has received the University of Toronto’s 2020 President’s Award for Outstanding Indigenous Student of the Year. The award is given to First Nations students of Indigenous ancestry (First Nations, Métis, Inuit) based on academic achievement and previous and/or intended future contribution to the native community. U of T selects one full-time, undergraduate student and one graduate student to receive the award on an annual basis.

Yesno grew up in Thunder Bay, Ont., and is a member of Eabametoong First Nation. The first Indigenous member of her family who will graduate from a university institution, she wanted to spread her wings and study in Toronto, a vibrant and diverse city. “Moving to Toronto was not quite as easy as I expected,” says Yesno. “There was definitely a transitional period. I left a city that is 30 per cent Indigenous to come to a city that is so diverse the Indigenous population can be harder to find. It was initially a challenge for me to find a community where I felt at home.”

Yesno has since found her community in-part by being an active member in U of T’s First Nations House and a successful student in Indigenous studies and political science. “First Nations House encouraged me to apply for this award. The house is a wonderful place of community support,” she says.

Yesno has been remarkably active in her community since high school. In 2017 she was selected to serve as a member of the Prime Minister’s Youth Council. For two years she provided advice on youth issues to Prime Minister Trudeau and the Government of Canada. “I learned a lot during my time on the council. The experience opened doors for me and showed me the good and not-so-good side of politics and its ability to affect change. Power,” says Yesno, “doesn’t come from having a seat at the table, it comes from your agency to occupy it as you see fit.”

As a part-time writer and public speaker, Yesno has voiced her concern for Indigenous, environmental, youth and LGBTQ2S+ issues in major Canadian media outlets including Maclean’s, CBC, TVO, CTV, APTN and the Toronto Star. On campus, she has been involved with U of T Pride, she has helped moderate the Hart House 100th anniversary series on Indigenous sovereignty and she and President Will Robins have discussed how to make Victoria University more inclusive by permitting smudging indoors. For the past three years, she has also spoken at Victoria’s Campus (Re)conciliations, an annual conference that addresses the role post-secondary institutions can play in heeding the recommendations of the Truth and Reconciliation Commission’s report.

Yesno’s efforts have not gone unnoticed by the public. In 2017 Yesno was named both Thunder Bay’s Leader of Tomorrow and received the Arts and Heritage Award for Outstanding Youth. In 2018 she was profiled by the United Way as a GTA Girl to Make You Feel Better about the Future and was selected as an advisor to the board for a federally mandated National Self-determination Framework for First Nations. The year 2019 saw Yesno profiled by APTN as a top Indigenous voice in Canada and in 2020 she was named one of six Youth Combating Racism by The Mosaic Institute.

Yesno also has an extensive amount of research experience. She has worked as a research assistant for Toronto’s Yellowhead Institute, the most influential, Indigenous-focused, policy think tank in the country. She currently serves as a research fellow for the institute, chosen as one of a handful of Indigenous thinkers from across Canada. She is also a research assistant to U of T’s Dale Turner who studies Indigenous politics in Canada with a focus on the role of Indigenous women in Wet’suwet’en First Nation politics and the Anishinaabek Nation of Ontario. And finally, she is a contract researcher at U of T’s Rotman School of Management. She provides expertise to Rotman’s Gender and the Economy (GATE) Indigenous women in business case studies.

How does Yesno keep up this pace and stay motivated? “I try to push beyond what seems possible,” she says. “A wise Elder once told me to find my passion. He asked me, ‘Before you go to bed at night, and you are resting your head on your pillow, what keeps you up?’ It was the well-being of my community. The pace is exhausting but I try to imagine that I am planting seeds with all the work that I do. I may not benefit from the shade my plants cast, but my grandchildren will and that keeps me going.”

Pre-register to watch the President’s Award for Outstanding Indigenous Student of the Year virtual ceremony, happening February 10 at 2 p.m. EST.