Students in their final year are offered several opportunities to be recognized and celebrated both at the University of Toronto and at Victoria College.

The student experience at the University of Toronto is about more than classes and books. It is about life on campus, in the community, and in the world at large. Student Leadership Awards recognize graduating students for making outstanding contributions to improving the world around them and inspiring others to do the same. 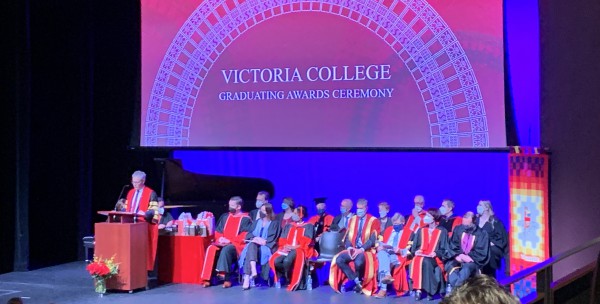 Graduating students are automatically considered for graduating medals or prizes. Most graduating awards are medals, awarded on the basis of overall A standing (i.e. a Cumulative Grade Point Average of 3.50 or higher after completion of the degree requirements). A few awards carry a small monetary value (i.e. prizes). Graduating award notifications are emailed by the Office of the Registrar and Academic Advising at the beginning of June. If you are pursuing further education, consider applying for a Postgraduate Scholarship.

For inquiries about these awards, please contact vic.awards@utoronto.ca. (please, include your student number)

These applications are now closed and will reopen in March, 2023.